Visiting the Farmhouse: A Trip to Jester King 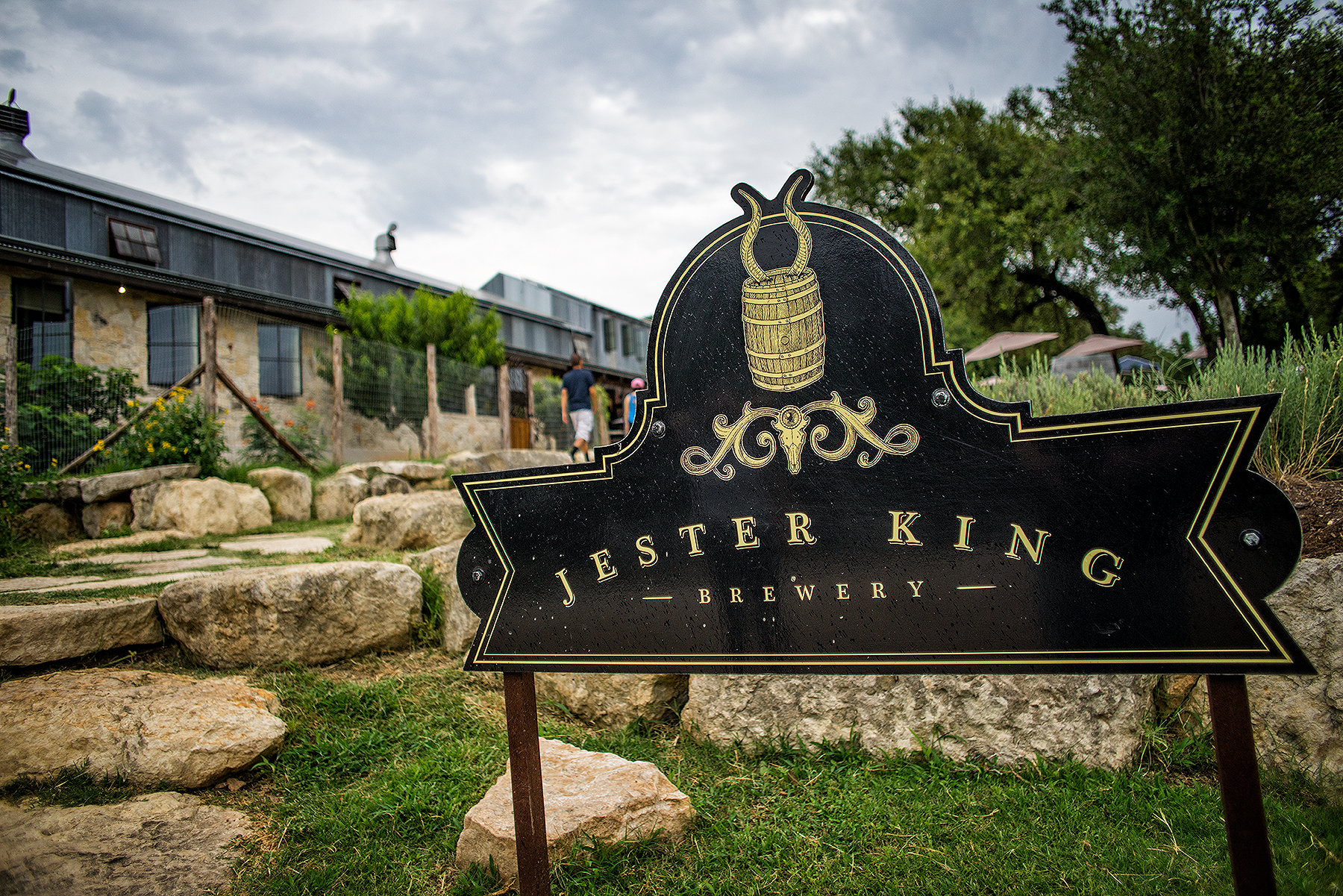 Jester King is located in the heart of the Texas Hill Country, a picturesque locale dotted with wineries, breweries, and the occasional gun range, just so you don’t forget where you are.   The hills roll on and on, and you can’t help but feel you’ve got nothin’ but time.  Book a Bed and Breakfast and an Uber, the beers are the only thing that’s rustic in these parts, and saddle up for some wine tasting and brewery touring.  But we came all the way out here for one thing…to visit the infamous Jester King.

Although just a few minutes outside of Austin, you feel like you’ve been transported to another world.   Well, another state at least.  The landscape is speckled with picnic tables astride with hipsters, families, and hipster families, all drinking the latest taproom-only offerings.  With new releases nearly every Friday, there are plenty of choices.  The genius of these taproom-only releases is the draw it brings, straight to the brewery.  It can be overwhelming but it will forever cement your love of these guys. The environment is rustic, to say the least; drinking farmhouse ales here just feels right.  The sights and smells are as much a part of the beer as the hops and malts.  Sip that farmhouse ale with lemon peel and clover honey and check out the tin-sided brewery/farm building and swat away the resident bees that buzz nearby.  Chug that amazing cherry sour and observe a bachelorette party mingling with children playing corn hole.  The point is, it’s cool here.  Not literally, it’s Texas after all. Being the early risers we are, we arrived just as they were opening so we had the run of the place for about .5 seconds, just enough time to have the bartender give us the lowdown on this weeks release.  Being that we like to drink pretty much anything with a yeast pulse, we opted for 4 ounce servings of a some of the good stuff.  There are no shortage of choices but here’s what we had. Montmorency vs. Balaton (Blend 4) is an American Wild Ale fermented with native, wild yeast and bacteria and then refermented with Montmorency and Balaton cherries from Michigan, prized for their “health” benefits and sour flavors.  This was the beer I was most eager to try, and it did not disappoint.  Bright, other-worldly raspberry in color, with spritzy, lightly tart cherry aroma with notes of leather and sour funk, it’s anything but one note.  Cherry and berry flavors predominate and then leave a tart and slightly dry finish.  This is a beautifully crafted beer.

Next up, the 2017 Hibernal Dichotomous.  The Dichotomous Series is a line of Saisons released seasonally, each one with a unique flare.  This one is brewed with grapefruit zest, fresh rosemary, and red chilies; all ingredients sourced as close to home as possible.  Beautiful hazy copper with so many layers of flavor, they hit you over and again.  Effervescent and wine-like, with a super savory quality that is somehow, inexplicably, highly refreshing.  Everything I never knew I wanted in a beer. On to the Noble King, another Farmhouse Ale, just slightly different from the others with an almost dehydrating dryness that cleans the crap out of your palate.  Which is exactly what I needed after the previous rosemary bomb.

Next, we tried the Provenance brewed with lemon and lime.  This Farmhouse Ale is unfiltered, unpasteurized, and 100% bottle conditioned; brewed with Sorachi Ace hops, which not only lend themselves so well to this style but are also highlighted by the citrus.  Light and refreshing with a lingering dryness-another delicious palate cleanser.

On to the Final Entropy, a collaboration with Jackie O’s Pub and Brewery in Ohio, a Kolsch-inspired beer brewed with Saaz and Fuggle hops, and plenty of them.  Although brewed with the addition of souring bacteria, the high dose of hops brings a lot of balance to this beer.  The Kolsch is strong in this one, but so is Jester King, leaving you with a bit of confusion.  Or maybe delirium from all the fun you’re having.

Up next is the Wytchmaker, a Farmhouse Rye IPA with tons of funk, balanced sweetness, and heavy hop character.  A beautifully hazy honey color with loads of minty, herbal, and woodsy hops, the Wytchmaker delivers everything you would expect from this style and then punches you with something special. RU-55 is the spitting image of a traditional Flanders Red Ale with tons of dark fruit and deep rich flavors with slight vinegar and lots of tartness.  Technically, this ones a Farmhouse Red Ale, but you’d never know that difference.  And it scratches your sour itch just right.  The barrel-aging adds so much depth of flavor with tobacco and vanilla.  It’s relatively balanced for being so sour, which is remarkable, making it super drinkable.  And I’ve never met a Flanders Red that super drinkable.

Now after drinking ALL the beers, we ended with the Foudreweizen.  This collaboration with Live Oak Brewing Co. brings the hefeweizen wort all the way from Live Oak out to Jester King, where it is fermented with resident wild yeast and bacteria in an oak foudre (pronounced “food-ruh”; that’s a large cask typically used for wine, for all us laypeople.)  The wild microorganisms do their thing and render this a funky, fabulous concoction.

Drinking beer at the source is always affecting.  You feel like you have locked in on the energy of the gods, touched the center of the universe’s life force. It’s an experience you will never forget.  Unless you sample too much of the goods.  Or maybe that’s exactly what it takes.

Anyhow, if you’re ever in the Texas Hill Country make your way over to Jester King.  They’ll cure what ales you.