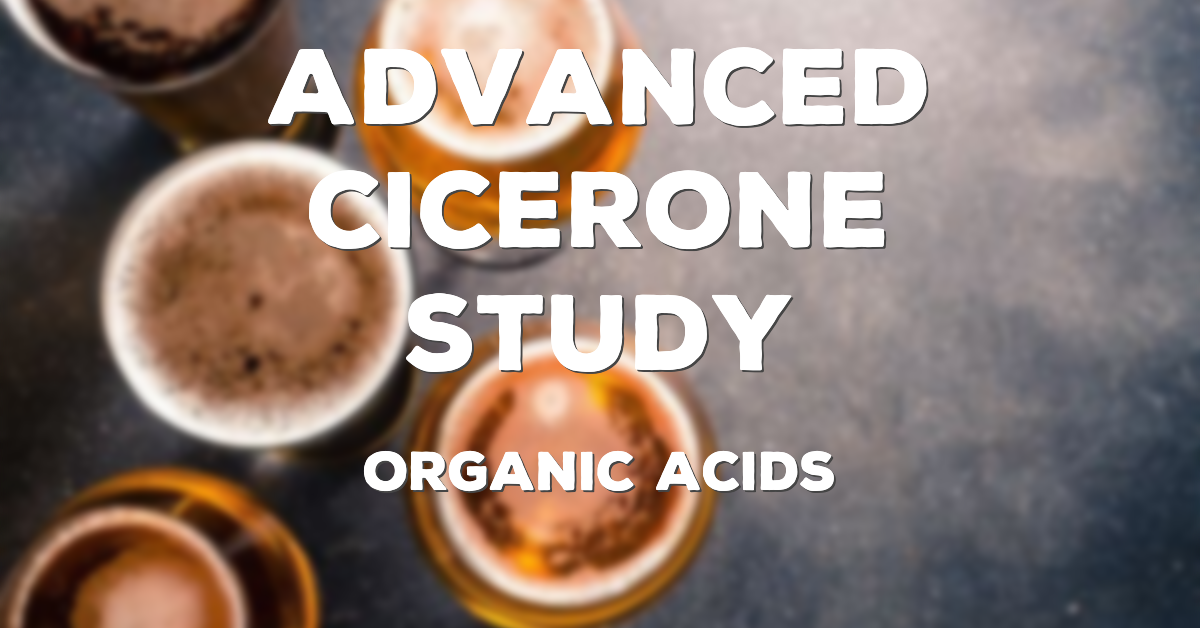 In this section we will cover the category of off-flavors known as organic acids.  These are a class of compounds that contain a carboxyl group and impart highly flavorful properties to beer.  At lower levels they may present a level of freshness while at high levels they generally indicate the presence of spoilage organisms.

Acetic acid is a weak acid produced naturally by yeast as a by-product of fatty acid metabolism and is also a key component in the synthesis of ethyl acetate.  This main volatile organic acid in beer is responsible for the taste of vinegar.  Acetic acid is also readily produced by acetic acid bacteria, such as Acetobacter, when in the presence of oxygen.   Acetobacter produces acetic acid by fermenting ethanol in an aerobic environment.  Since Acetobacter is a happy camper in wood (and wood is a naturally porous medium) it’s no wonder long term barrel-aged beers can tend toward vinegar aromas and flavors.  In certain circumstances, as in Flanders Red Ales, Oud Bruin, and Lambics this flavor is a welcome addition.  Acetic acid may also be synthesized through oxidation of acetaldehyde in mishandled bottled products.

The best route for control is to pitch the appropriate amount of yeast (as yeast overgrowth can result in unwanted acetic acid), practice hygienic brewing standards, and limit exposure of the beer to oxygen post boil.

Butyric acid is a carboxylic acid that is produced by anaerobic bacteria during glucose fermentation.  Some of these are Clostridium, Megasphaera, and Lactobacillus species.  Clostridium is the main culprit and lives naturally in soil, feces, plants, and also spent grain.  Butyric is always an off flavor as it is the main aroma compound in vomit.  It may also present as bile or rancid cheese.

There are a number of measures to be taken to regulate the presence of this compound.  The brewer may lower the pH of the wort through brewhouse acidification.  Another method is to ensure a healthy yeast culture so that it might compete with spoilage organisms during fermentation.  If kettle souring, the brewer can purge the wort of carbon dioxide.  And finally, sanitary brewing practices are the best way to prevent contamination.

Isovaleric acid is a fairly ubiquitous fatty acid found in plants, essential oils, foot sweat, and even cheese.  It gives aromas and flavors of foot sweat and hard cheeses and is generally considered an off-flavor in most styles except certain stouts.  Most often this acid is created by the oxidation of hop resins as a result of exposure to oxygen for long periods of time.  It may also be created by the breakdown of leucine during fermentation by Brettanomyces.

The best way to prevent isovaleric flavors is through hygienic brewing practices that prevent contamination by wild yeasts and to properly store hops so that they are kept cold and tightly packed to limit exposure to oxygen.

Lactic acid is an alpha hydroxy acid produced primarily by Lactobacillus and Pediococcus and to a lesser extent Brettanomyces.  Lactobacillus and its cousin Pediococcus metabolize sugar, just like yeast, but instead of producing alcohol they produce lactic acid instead.  Lactic acid is also known as milk acid because of its presence in fermented milk products like sour cream, yogurt, kefir, and cottage cheese.  Although thought of as a sign of spoilage in many styles, lactic character is an important quality in many “Old World” beers such as Leipziger gose, Berliner weisse, lambics, sour Belgian ales, and even some witbiers.  Lactic acid imparts a yogurt tang or sour milk flavor that may be harsh when added directly to the beer.  When a lactic fermentation is allowed to take place the final product is more complex and well-rounded with a fuller mouthfeel.  This is much more appealing than the sharpness from lactic acid alone.

In the case of German sour styles like gose and Berliner weisse, brewers must get creative to sour their beer while also complying with Reinheitsgebot.  Reinheitsgebot is the German purity law from 1516 that regulates a number of food products including beer and brewing ingredients.  With regards to beer, only water, hops, and barley are approved ingredients for brewing (yeast wasn’t included in 1516 because it had not yet been discovered).  In order to be a compliant product, brewers would leave some or all of the wort unboiled and allow it to rest so Lactobacillus could do its thing.  This is also the case with Belgian witbiers where a mash rest is often employed to develop starches but inadvertently allows resident Lactobacillus to perform a lactic fermentation giving the beer the slightest tang.

During lambic fermentations, standard ale yeast is employed first, with Brettanomyces working slowly along side them, then the lactic acid bacteria will ramp up once primary fermentation is complete.  Since Pediococcus is the primary actor here, there is a lactic sharpness present with Lactobacillus adding some balance.

When a brewer is working with a more modern style where lactic character would be out of place, hygienic brewing practices, proper mash techniques, and fermentation temperature controls are needed to prevent contamination by lactic acid bacteria and/or Brettanomyces.