Advanced Cicerone Study: All About Esters 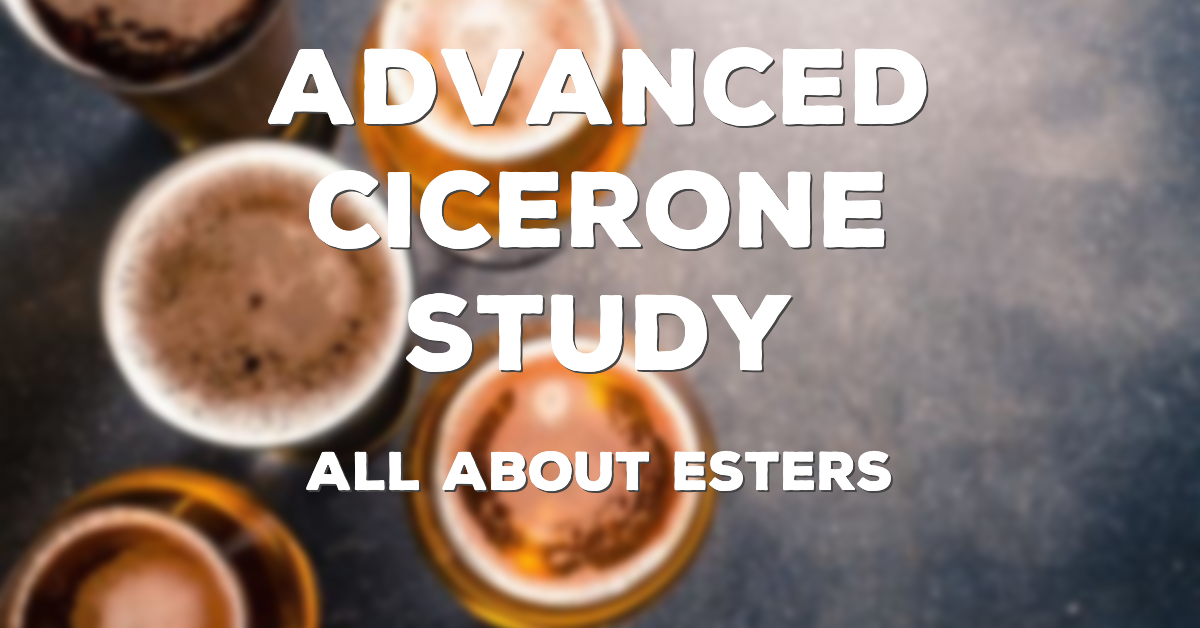 Anyone who has ever experienced the lively fruitiness of a Saison or the deep, rich sweetness of a Belgian Dark Strong then you are in the know when it comes to esters.

Esters are a large class of organic compounds that are most often derived from carboxylic acids and alcohols. Generally, they are defined by an ester group (a molecule made up of a carbon double-bonded with an oxygen and single-bonded with another oxygen) that connects two organic molecules.  Lower molecular weight esters are the most common aroma esters and are the same ones that are present in beer, wine, foods, and in industrial products (in their synthesized forms). Esters have a high impact on flavor and aroma in beer and can produce unwanted compounds that impart off-flavors.

There are two ways that esters may be synthesized in beer and both include the two main base molecules: carboxylic acid and ethanol.  The first, and slowest way, is through a spontaneous condensation reaction.  The second is an enzyme-driven process that occurs in yeast during fermentation.  Both reactions yield the same result to varying degrees but the second reaction gives the most final product and therefore has the most effect on the aroma and flavor.

There are a multitude of esters in the chemical world, but since we are interested in beer we can focus our discussion on a few important ones.

Ethyl acetate is the most abundant ester in both beer and wine due to the abundance of acetyl CoA (acetyl CoA, if not utilized for another purpose, will convert into acetic acid, a carboxylic acid) and the fact that ethanol is the main alcohol.  Acetyl CoA is a hugely important compound in energy production, fatty acid synthesis, protein synthesis, and nucleic acid synthesis as well.  Another reason this ester tends to be present at higher levels is that the reaction that breaks it down (hydrolysis) moves at a slower rate than the reaction that synthesizes it (esterification).  At low levels ethyl acetate may impart a pleasant complexity to the beer.  That can quickly change when at higher levels, leaving a solvent or nail polish remover aroma and flavor.

Controlling the levels of ethyl acetate are vital to creating a clean and precise product.  The first place to start is with the yeast.  Different yeast strains will preferentially produce certain organic acids and alcohols versus others leading to the synthesis of different esters from strain to strain.  Ale yeast tends to produce more esters than lager yeast.  Partially this is strain-dependent but also has to do with fermentation temperature (warmer temperatures tend to drive esterification and condensation reactions).  In addition, the pitch rate may also affect ester production due to the fact that the majority of these are produced during yeast reproduction.  Once the yeast have replicated to a threshold, reproduction and ester production begin to slow.  With more yeast present in the pitch, this would occur earlier allowing less time for ester production.  Pitching too few yeast will yield more esters, but can lead to poor yeast health and issues with fermentation.  Therefore, it’s important to find the ideal pitch rate for the yeast strain and style being brewed.  Another area that affects ester production is aeration and wort viability.  It was mentioned earlier that acetyl CoA is an important compound for myriad uses in the cell, including fatty acid synthesis.  Fatty acids, namely sterols, are key components of the cellular membrane of yeast.  This comes into play during reproduction which occurs mainly in the presence of oxygen at the onset of fermentation (oxygen is needed for sterol synthesis).  If there is not enough oxygen present in the wort during pitching, then acetyl CoA will likely build up in the yeast cell because the cell is unable to utilize it.  This can lead to the overproduction of ethyl acetate.  If there is too much oxygen, the opposite will be true.  Wort composition is also an important area to monitor.  The wort must contain appropriate amounts of nitrogen (in the form of Free Amino Nitrogen), vitamins, minerals, and sugars.  If any of these are out of range, ester production may increase or decrease to undesirable levels.

The main pathways that create ethyl acetate are the same ones that create this ester.  However, the components are different-ethanol and butyric acid.  Ethanol is the main alcohol product by yeast but butyric acid is an off-flavor compound not produced in most yeast fermentations.  Butyric acid is a carboxylic acid that is produced by various species of bacteria that are all considered brewery spoilage organisms.  These include Clostridium spp, Megasphaera spp, and Lactic Acid bacteria and they produce this acid during glucose fermentation under anaerobic conditions.  It is a key component of vomit and is responsible for its characteristic smell and taste (you can imagine how pleasant it must be).  However, when this acid is combined with ethanol through esterification or condensation, it changes completely and imparts flavors and aromas of pineapple, mango, and juicy fruit gum.

Traditional ale and lager yeast strains, as well as Brettanomyces, will convert butyric acid and ethanol into ethyl butyrate, although its presence may be indicative of a brewery hygiene issue.

Another source of ethyl butyrate is from certain hop varieties such as Citra, Galaxy, and El Dorado.

Controlling this ester comes down to brewery hygiene and ingredient choice.  Choose the correct yeast strains and hop varieties for the style and utilize hygienic brewing practices-always.

This banana ester is so ubiquitous that it is literally present in all beers to some extent.  It is a key flavor component of Bavarian weissbiers as well as certain Belgian styles and adds a lovely, pleasant complexity to them, even at high levels.  Isoamyl acetate is formed via the same reactions as other esters but the constituent alcohol is isoamyl alcohol rather than ethanol.

Worts high in glucose generally favor the production of this ester.  One of the best ways to achieve this is through a decoction mash whereby a portion of the mash (with little to no water) is removed and heated quickly, then returned to the remaining wort where it quickly increases the total temperature which increases extraction of starch.  More starch=more glucose, to put it simply.  If banana flavor isn’t your bag, limiting the overall extraction is probably a good bet, along with temperature control.

There are a number of other esters that are common in beer, to name a couple more.

Information in this article was collected from the following sources: