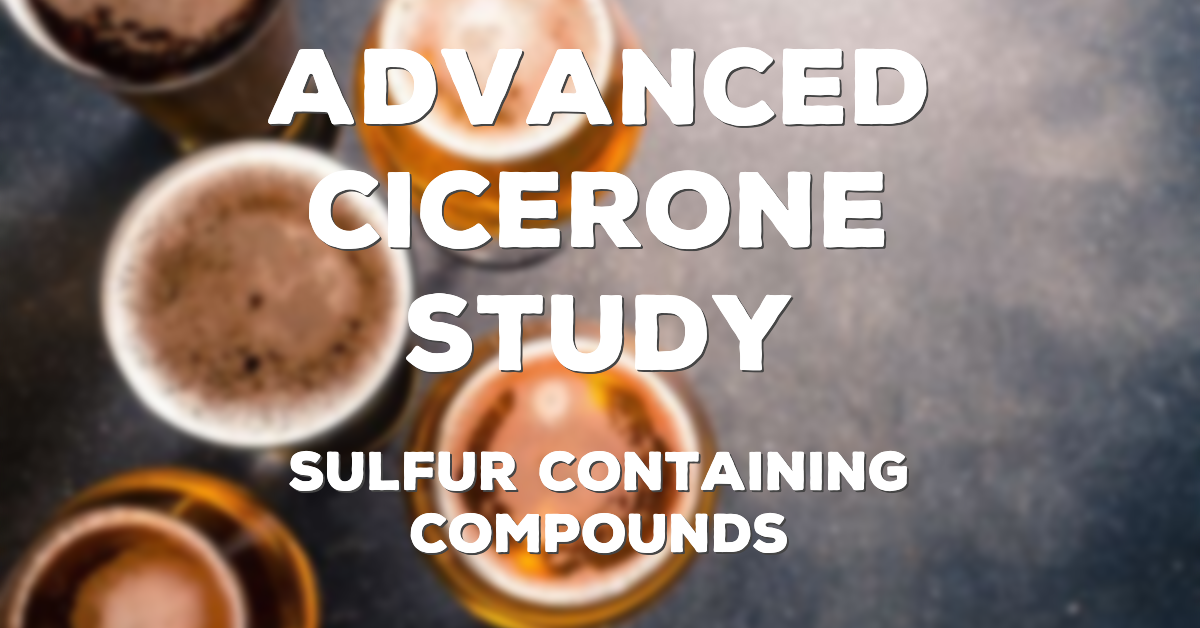 When you think of sulfur compounds you most certainly think first of rotten eggs or lit matches.  It may surprise you to hear that these compounds actually run the gamut of aroma and flavor from black currant, catty, rhubarb, and creamed corn to rotten eggs, skunky, rotting cabbages, and dirty drains.  Is your mouth-watering yet???

This one’s a mouthful.  A hop-derived polyfunctional thiol that tends to be highest in Simcoe, Summit, Apollo, and Australian Topaz hops, to name a few.  Most of this compound can be found in the lupulin gland and the remainder on adjacent leaf material.  This class of sulfur compound tends to be the most beneficial with regards to flavor because they have the potential for the most intense fruity flavors.  They are bound to the hop itself and are cleaved off by an enzyme present in yeast known as beta-lyase during fermentation.

4 MMP can be increased by utilizing the appropriate hops and also by adding these hops to the whirlpool just prior to fermentation (i.e. post-boil).  Choosing the appropriate yeast strain to ensure the presence of beta-lyase would help as well.  If the idea is to limit this compound, it is well-known that copper ions bind to thiols and limit their effect on the beer so copper kettles should be employed for this purpose.

DMS is an easily identifiable off-flavor that is common in certain lagers, where it is acceptable to a certain degree, and gives flavors of creamed corn or cooked vegetables.  It is malt-derived where its precursor, SMM (s-methylmethionine), is present in the embryo of barley and released during germination.  It is highly sensitive to heat and will be lost during the heat-kilning of malt.  Another precursor known as DMSO (dimethyl sulfoxide) is released during the malt curing stage and may come into play at the end of fermentation or during a bacterial infection.

In the case of pale and pilsner malt, only low kilning temperatures are used so SMM may persist in the wort.  When this is the case, SMM will be broken down during the boil and wort rest into DMS where it will stay.  At the end of fermentation, yeast will happily convert any residual DMSO present into DMS further complicating matters.  And if the beer happens to be infected by a wort spoilage bacteria this process will happen even more quickly.

Best rule of thumb, choose the malts that work best for the style being brewed and accept that when pale malts are employed, a bit of DMS might be present.  In all other cases, make sure your malts are properly kilned and chill the wort down quickly to limit the time available for SMM to be converted to DMS.  And as always, practice hygienic brewing.

Hydrogen sulfide is a highly volatile sulfide with a very low flavor and aroma threshold.  It is easily identifiable as rotten eggs but the nose becomes “immune” to its aroma quite quickly.  H2S is always a yeast factor and is produced by both ale and lager yeast, to some extent, during fermentation and maturation.  It is a signature flavor in Burton ales, often referred to as the “Burton snatch” or “Burton stench”.  In styles such as these it is a welcome addition, in most others it should not be detectable.

This yeast metabolic by-product is often indicative of a problem.  It could be that the wort is deficient in FAN or necessary amino acids.  It could be an issue with the yeast itself-wrong yeast strain, poor yeast health, yeast dehydration, and low pitching rate.  H2S may also be a result of incorrect fermentation temperature, CO2 buildup in the fermenter, or the presence of sulfate ions being reduced into cysteine and methionine leaving H2S as a by-product.  Another factor is contamination by wild yeast or bacteria.

To control H2S levels it is important to ensure adequate free nitrogen for amino acid synthesis, proper aeration at the outset of fermentation to limit the reducing condition that promotes H2S formation, practice hygienic brewing to limit contamination, and choose (and pitch appropriate amounts of) the correct yeast strain.

3-MBT is a sulfur-containing compound (thiol) that is created through an oxidation reaction of iso-humulones in hops.  Generally this is a photo-oxidation reaction but has also been found in some canned beers as a result of thermal aging.  In instances of photo-oxidation, light- or green-colored bottles allow exposure of the beer to UV or fluorescent light which reacts with the bitter alpha acids in hops causing the cleavage of an isopentyl side group.  This results in a dimethyl allyl radical which reacts with other thiols to form 3-MBT.

Although this compound is technically always an off-flavor many European lagers have made it such a standard in their beers that consumers have come to accept it as a part of the flavor profile.  Science has brought us a long way with the creation of light -table hop acids known as RHO and Tetra, among others.  These hop alternatives limit the presence of hop iso-humulones thereby limiting the reaction potential, even in the presence of light.

Controlling this flavor is best done by limiting the presence of oxygen post-boil, utilizing brown bottles or cans to minimize light exposure, or with the use of light-stable hops such as RHO or Tetra.

Mercaptan is a thiol present in all beer to some degree (usually at very low levels) but considered an off-flavor at detectable levels.  At high levels it comes across as dirty drains, rotting cabbages, or sweaty socks-not good.

Methyl mercaptan is often released at the end of fermentation or during the conditioning period due to yeast autolysis.  It can also be created by bacterial cultures present in the beer.  The levels present generally depend on yeast strain, yeast health, and fermentation conditions.  Another possible contributor to methyl mercaptan levels is through hop thiols from dry hopping.

Best means of control are through sanitary brewing conditions, utilization of appropriate yeast strains, proper fermentation conditions, and removing the beer from the yeast at the ideal time.

This sulfur compound is created through a complex system of pathways beginning with various sulfur-containing substrates through a number of means.  We will talk about the most important ones here.

SO2, or sulfur dioxide gives the aroma of a struck match and is considered an off-flavor at higher levels it is readily produced by lager yeast during sulfur-containing amino acid synthesis.  Sulfite is a compound necessary for the production of the amino acids cysteine and methionine (both of which are necessary for functioning yeast cells).  When sulfite is present in excess of the need for amino acid synthesis, SO2 is formed.  In addition to being useful as a building block for amino acids, sulfites are also valuable antioxidants.  They have strong interactions with oxygen which allows them to accept free radicals and prevent oxidation of the beer.  Because of this quality, they are often added to beer as a preservative.  Sulfiting agents are also good for limiting microbial growth, limiting bacterial and fungal proliferation through a number of pathways.

If the yeast strain is healthy, and fermentation conditions are appropriate, sulfiting agents will be readily utilized limiting their contribution to aroma and flavor.  But in situations where the wort pH is too high, the pitching rate is low, or aeration is not adequate SO2 may become an issue.  As in most circumstances, ensure that the yeast are able to ferment in optimal conditions (appropriate pitching rate, fermentation temperature, proper aeration, etc.) and limit contamination and the presence of this off-flavor should not be an issue.